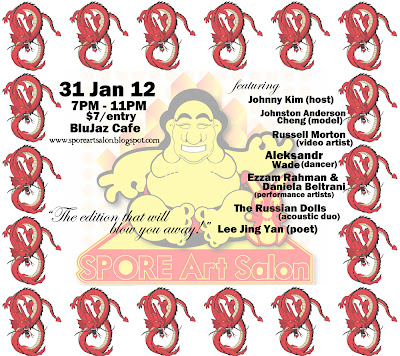 YOU GUYS, we had a great time last month, albeit feeling just a wee bit nostalgic about the year coming to an end... but having everyone of you come out to the salon chased them blues away!! So all's good!

This January, we're starting off 2012 with a bang! We have in the line up a couple of big salon 'inaugurals' - Video installation art! A dance-ccentric hip-hop performance!! Two musicians, a breakthrough, presenting their very best!!! A NATIONAL poetry slam winner!!!! AND... performance art collaboration!!!! We are also very honoured to have an amazing dancer/musician/performer that you salon regulars will be familiar with, host the 14th edition for the very first time! And if you have caught the screening of 'The Cloud of Unknowing', representing Singapore at the 54th Venice Biennale... we have invited its main character to come model for drawing sessions that evening! So buckle up... and get ready to be Blown away!

SPORE Art Salon is a non-profit initiative created for visual artists to meet, mingle, inspire, and share with performing artists. During the event, we alternate between drawing sessions with live models, and performances from musicians, contortionists, poets, dancers, actors and more. We also feature works of, and demonstrations by visual artists, individually or collaboratively.

For those who are new to the art salon, our event is modeled after world famous Giles Larrain's Art Salon in NYC, with a distinctly Singaporean twist and flavour!

There is a minimum donation of $7/person at the door, and proceeds will benefit our featured artists. The bar and kitchen will be open, so come have some drinks and dinner, meet, mingle and inspire with fellow creatives of various disciplines. Guests are encouraged to participate in the life drawing sessions in between performances, so, bring your sketch materials along!

RUSSELL ADAM MORTON (video artist)
Russell Morton is a film maker from Singapore. He is currently based in London, UK, where he is doing his Masters in Fine Art from Camberwell College of the Arts.

A video conceptualized as a creative-cathartic exercise for the artist will be installed at BluJaz Cafe for the SPORE Art Salon's 15th Edition. Having moved to a new country and desiring everything that he (Russell) cannot have, it dawned onto him that desire only exists when one cannot have it. After which, desire dies. The video glorifies a feminine figure; Laughing, dancing, playing cheekily at the omnipresent viewer, occasionally revealing a secret world that she possesses.


Yeo made his debut feature film In the House of Straw (In Competition for the Golden Kinnaree Award, Bangkok International Film Festival 2009 (World Premiere) Official Selection, Singapore International Film Festival 2010), after he was broken and intrigued when his bicycle was stolen by bicycle thiefs. He wrote and directed short films such as Aik Khoon(competition for the Silver Screen Awards - Singapore International Film Festival 2005)and Waking Monkey (The Substation’s Best Film Award for the Best of First Takes 2007).He is also an award-winning director of photography for Ho Tzu Nyen’s The Bohemian Rhapsody Project and Sun Koh’s The Lucky 7 Project. He is currently reading Philosophy at the National University of Singapore, and can be seen drinking teh si kosong with friends in his spare time.

JOHNNY KIM (host)
Johnny comes to us from San Diego, California,
USA and is proud to be a part of the "Voyage de la Vie" family. He has performedall around the world with the Jean Ann Ryan Company on Norwegian Cruise Lines, graced the stage in the world famous "Les Folies Bergere" in Las Vegas, and defied gravity in "Cirque de la Mer" at Sea World San Diego. Some of his favorite credits include "Miss Saigon" at NCT, and the 31 city arena tour with the "Radio City Christmas Spectaular" starring that Radio City Rockettes.

Besides dance and acrobatics, Johnny is also a singer/songwriter and accomplished pianist. He would like to thank his family and friends for their unconditional love and support through this amazing journey.
Peace and Love.


LEE JING YAN (poet)
Jing Yan is an emerging local spoken word poet. Winner of the Singapore National Poetry Slam 2011, he considers himself very new to the medium of spoken word poetry, but enjoys the opportunity its affords him to deliver his words on stage to a live audience.

He spends his free time writing, playing music and devising new ways to fool his audiences into thinking he's a genius.

After conversation and much needed deliberation with Wendell Frando, Aleks will present 3 short dance pieces, hip hop inspired. Each piece will represent a reminder of certain periods in Aleks' life - from the past, present, and future, choreographed against the beats of selected music.
Born and raised in Las Vegas, Nevada, Aleksandr started off as a competitive gymnast. Taking beginning ballet during his training to improve his presentation was his only form of training through dance. When he got into high school for the performing arts he spent most of his time doing lights and sound as a technical theater major. It was not till his 3rd year where he finally got on stage and was cast in the school dance drama. Still a gymnast by profession at this point in life, he is inspired to dance more because, "Music talks to you, it would be rude if you did not talk back, DANCE!!", and hope to be well received by all.


Ezzam Rahman is a multi-disciplinary artist graduated with a Bachelor of Arts (Hons) in Fine Arts from University of Huddersfield. He had participated, initiated and curate numerous local and international group exhibition, events and festivals. He curated the Roving Artists at The Substation for the annual Night Festival in 2010/11 and was co-directing Fetter Field Performance Art Event from 2006/07/09 and 2012. Though he had been formally trained as a sculptor, he is most comfortable with installation and performance art. Ezzam's works vary from the choice of medium, concepts and strategies of presentation. He favours narratives due to the ability to convey his ideas, inform as well as to tease his audience. His current focus is to embed performance art in video and photographic presentations.

Ezzam enjoys talking to himself and smiles to sleep.


Daniela Beltrani, classically educated in Italy, a doctor in Law and a docent for the Singapore Art Museum, Daniela  gained a Masters of Arts in Contemporary Asian Histories in 2011 from Lasalle College of the Arts, Singapore. Since 2010 Daniela had curated solo and group exhibitions and written articles for art publications. In June 2011 she set up a performance art platform, SPAM - Self Performance Art Meetings. Her interest in performance art both as spectator and performer allows her to explore different levels of communications. On lazy hot afternoons, Daniela enjoys sipping Teh Halia in Little India.
THE RUSSIAN DOLLS (acoustic duo)
http://edzmusic.com
Fuelled by a fair passion for art and music, The Russian Dolls presents Fauzo & Edmund at the SPORE Art Salon, with a short but power-packed set of tunes to tickle and please your ears. 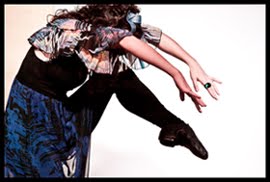 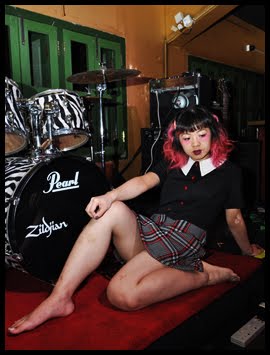